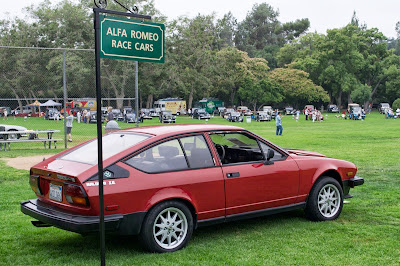 We were invited to participate in the third annual San Marino Motor Classic last Sunday at Lacy Park in San Marino, CA.  Ed and Nora and I left San Diego county early on Sunday and an hour and a half later we were pulling up to the park entrance where we were greeted by an army of volunteers and vectored into the park in a very efficient manner.  It took no time at all to get in, get our participant packet and be photographed!  As we drove around the green several volunteers and other workers recognized and gave thumbs up to the Alfas.  Once we were parked in our designated spot, the designated volunteers showed us the VIP tent where the complementary breakfast was available, where the nearest rest rooms were (real rest rooms with working plumbing, no porta-potties!).  It was very well organized and really made us feel special.  Hope we get invited back next year.

Posted by Araknd at 5:59 AM No comments:

The 4C is revealed at Geneva

Posted by Araknd at 9:06 AM No comments:

Participants at the Eric Rosenau Memorial Car Tour on January 20, 2013.

Grand Prix of the United States at Circuit of the Americas

Today was the realization of a lifelong dream, to attend a real live Formula 1 race weekend.  The weather was perfect, the breeze was slightly on the cool side, but warm in the sun.

Traffic was kind of a mess getting the shuttle pickup point in downtown Austin. Parking was available, but not cheap, $20 for all day.  There was a heck of a line when we got the the shuttle depot to go to the Circuit of the Americas, but it moved along, even saw an Alfisti friend from way back, Bernie Z in the line. (We saw Bernie the night before at the Texas Hill Country Alfa Club dinner).  Once we were situated on the bus it was a smooth and relatively fast trip.  When we got to the bus parking area at the COTA, we saw that there was about ¼ to ½ mile walk to the gate.  It's all smooth asphalt, so the walking was easy, just a little more than expected.  One thing that one could not ignore was the sound of the cars that were already on track for Practice 1.  It was just an overwhelming scene when we passed through the gate into the grounds and the glorious sound of the racing engines cranked up as the drivers were learning the track.

P1 was over, so we just hung around the "Grand Plaza" where the food vendors  and the team merchandise vendors were and it was near lunch time so we found an empty table nearby and rested.  We were shortly joined at the table by a young gent from Oxford, England.  He said that this was his FIFTH Grand Prix, his last race was Singapore.  He readily admits that he isn't married and knows that if and when he does get married, his days of carefree global travel are over.  It was great hearing his tales of adventure and good fortune when he goes to the races and he has been to all the major tracks including Monaco. What a life!  And for those of you that don't follow F1 closely, Oxford is home to the Marussia F1 team and the Lotus Renault team.

Then it was time to get something to eat before heading over the footbridges to our seats in theTurn 4 bleachers.  What a mistake!  The lines were huge at all of the food vendor trailers and the prices were exorbitant.  That's something that COTA will have to fix.

Working our way over to the infield footbridge while P2 was starting was incredible! Until we got to the bridge to Turn 3.  For some reason, they closed the gates in both direction and would not let anyone over the bridge.  The only thing that we heard was that someone had somehow thrown his hat up in the covered bridge and it landed on the track area.  Eventually with tempers of the crowd escalating, the event "officials" opened up the gates and everyone was placated.  We found our seats in the bleachers and settled in to watch the rest of the session.  Jennifer told me that when I was waiting line for the food, she was wrestling with whether she was going to come with me on Saturday or not.  When we actually got to see the cars at speed, she changed her mind and was hooked on F1 racing live!

Photo Album
Posted by Araknd at 8:21 PM No comments: